Stop ‘Whitesplaining’ to Communities in Need 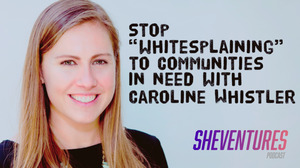 Inspired by her lawyer grandfather, from a young age Caroline Whistler grappled with the question: What does it mean to serve others in a measurable and impactful way?

To that end, Whistler cofounded San Francisco–based nonprofit Third Sector Capital — a consulting firm that has deployed $800 million in government resources and $40 million of private funding to help 40 U.S. communities. Whistler advises governments, community organizations, and private funders on how to help the public sector measure the effectiveness of their social programs to truly impart change and racial equity across the United States.

After college, Whistler received a Fulbright scholarship to study how nonprofits in Brazil scaled their public programs — and that’s when she began to effect change. Given her self-described “very white suburban upbringing,” Whistler learned that the best way to help was to listen — to take a step back from academia and work in solidarity with the communities that knew the issues they faced better than an outsider.

Named as one of San Francisco Business Times “40 Under 40” in 2020, Whistler is working toward improved and equitable outcomes for Black Americans, as she believes that if we can tackle racism in the public sector, there will be enormous strides toward equity and opportunity in this country.